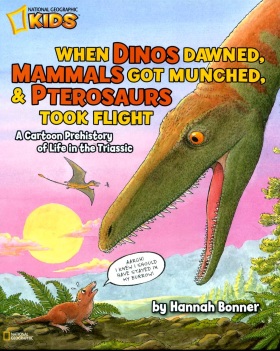 In When Dinos Dawned, Mammals Got Munched, and Pterosaurs took Flight, A Cartoon Prehistory of Life in the Triassic,  the survivors of the humongous end-Permian extinction evolve and diversify to fill every nook and cranny of the planet in a burst of evolutionary creativity. On land, forests of non-flowering plants reached new heights of diversity, insects evolved all sorts of techniques for eating the plants, and a host of odd archosaurs evolved, including the earliest dinosaurs. In the oceans, ichthyosaurs and other marine reptiles took center stage for the first time. Our shrew-like mammalian ancestors also emerged, fur and all (we think). The stage was set for the start of the true Age of Dinosaurs in the next period, the Jurassic.

Praise for When Dinos Dawned:

“Both casual and confirmed fans will devour this delicious blend of fact and foolery with relish.” –Kirkus (starred review)

“This book may attract a bigger readership than just dino-fanatics and goes deeper and broader in scope than a typical litany of dinosaur species. It is proof that complexity does not have to be boring.” –Booklist