I’m currently working on artwork for an exhibit about the interrelated evolution of Life and the Planet. The scientists I’m working for are paleobotanists/paleoecologists Cindy Looy and Ivo Duijnstee at UC Berkeley.  I spent two months with them this Spring getting the project started. I will now finish the illustrations in my studio in Palma. Both the title and the logo of the exhibit are provisional, by the way, and may change.

The exhibit will occupy an existing glass case 14 meters (46 feet) long in the lobby of the Valley Life Sciences building, near a T. rex skeleton and various other exhibits.

What’s different about this exhibit as compared to others about the origins and evolution of life is that it focuses on how profoundly life and the planet have affected one another. The oxygen in our atmosphere and oceans is a result of photosynthesis, entire limestone mountain ranges are the result of the ability of marine organisms to make shells and other body parts out of calcium (which eventually formed rock and was uplifted by plate teconics), for instance. In the other direction – that of the inorganic world affecting life — we will see how plate tectonics has joined or separated groups of plants and animals over the eons, and how volcanic activity and meteor strikes have caused major extinctions. And we sill also see how everything, living and not, affects climate. 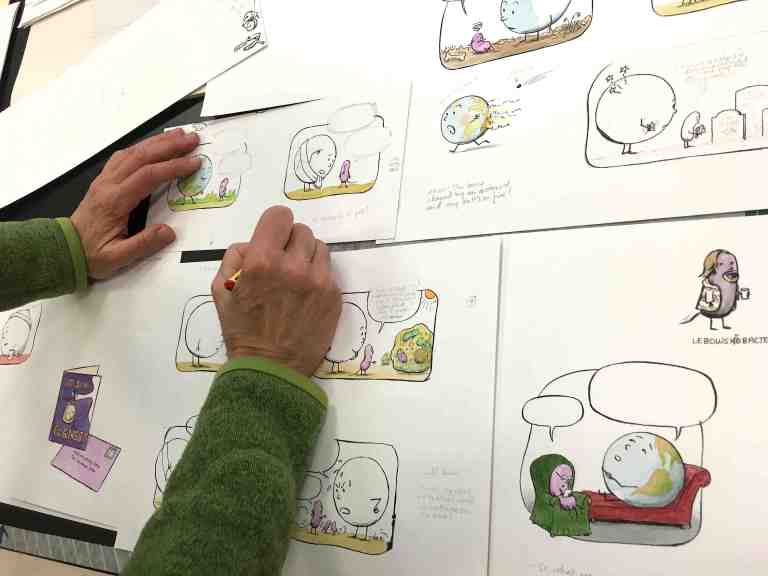 We decided that besides the “serious” images and text there would be cartoons in which life (represented by a bacterium) talks to Earth about what’s going on between them. It’s a way to lighten things up while also reinforcing scientific points in a kid-friendly way that can be grasped at a glance.

Here are some images. I’ll be finishing up the illustrations in my studio this fall.