Over the course of 2017 I worked on a very cool project for the University of Wisconsin-Madison’s Geology Museum. Scientists at UW-Madison are studying the first several billion years of the planet’s existence and trying to figure out how much of our planet’s surface was covered in oceans, and how much was above water in the form of continents and islands. They are looking at chemical signatures in very ancient sedimentary rocks that formed underwater. These chemical signatures give them some idea of how much continental rock was weathering away at the time and ending up as minerals in the sea.

UW-Madison Geology Museum’s assistant director Brooke Norsted contacted me to know if I’d be interested in illustrating some outreach materials based on this research. The goal was to have materials that Brooke could show visitors to the Museum that would help them grasp what Earth might have been like in its infancy and adolescence, between two and four billion years ago.

We started with a video conference with Brooke and with researchers Aaron Satkoski and Clark Johnson. The ideas that emerged were: to do three landscapes representing 2, 3, and 4 billion years ago respectively, three globes showing the continents and oceans in those same timeframes, and the field notes of a pair of imaginary scientists who explore these ancient worlds with the help of a time machine. As I worked on the images and the globes I consulted on a regular basis with Dr. Satkoski. These reconstructions are quite unique, and entirely based on current research. This made the project exciting; I had no previous reconstructions to go by, but instead had to follow Aaron’s directions as to how intense the sunlight was at each point in time, what color the sky might have been, what the fossil record tells us about the presence of cyanobacteria, and so on. 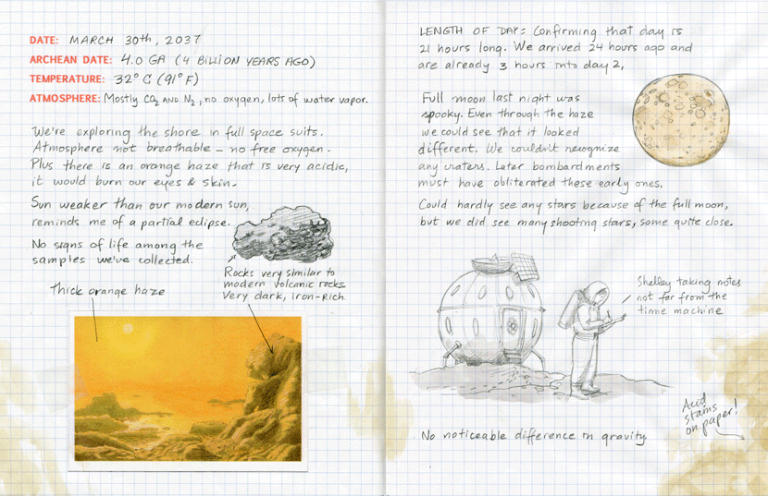 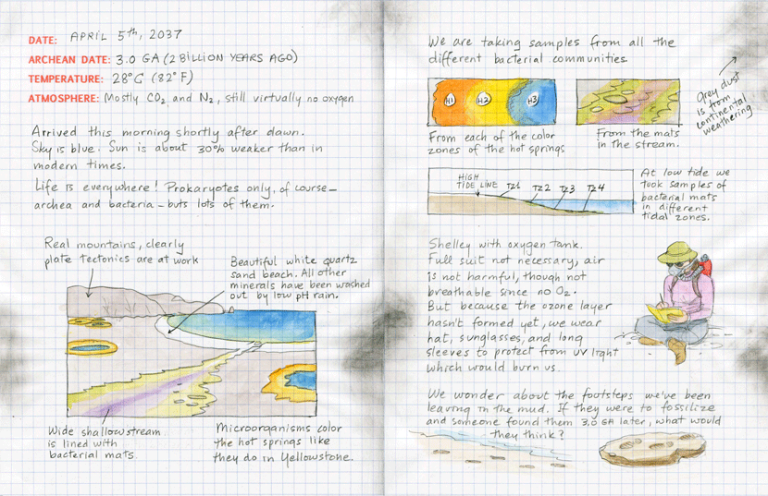 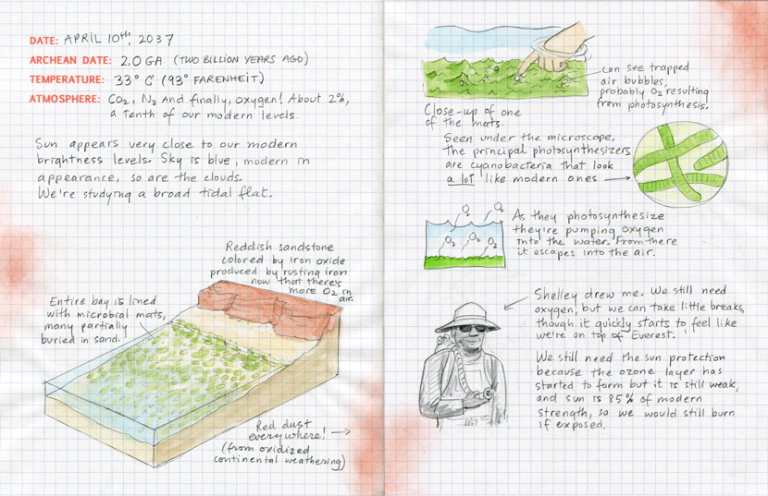 I had met museum director Rich Slaughter and assistant director Brooke Norsted over ten years ago during a conference of the Guild of Natural Science Illustrators. Rich and Brooke took a group of us illustrators on a field trip to hunt for Ordovician fossils in a huge rock pile not far from Madison. (The ones I collected have lived in a shoe box in my studio ever since). Years later I contacted Rich Slaughter for help illustrating the Tully Monster (is it a mollusk? Is it a chordate? It’s superweird!) for When Fish Got Feet, the three-in-one version of my “When” books. It just goes to show that you never know when a contact will re-emerge: soon after that Brooke contacted me about doing this wonderful project.